Both throughout my playing career and after, I have been privileged to have been invited to participate in numerous golf events at some of the most luxurious locations all around the world.
Â
Hosting your own event, in your own name, for the charity of which you are President can be a daunting task. Certain criteria have to be met by the host venue both for the celebrity guests and the amateurs.

Desert Springs as a venue offers my guests a relaxing ambience, a unique experience and an underlying overall charm. It has lots of quality facilities to enjoy besides world class golf. Its staff afford a warm welcome and unrivalled professional service
Â
That is why my decision to host the Ian Botham Charity Golf Classic in aid of Leukaemia Research at Desert Springs in October 2008 was an easy one and due to its phenomenal success, why I have selected Desert Springs to host the final of my next Charity Golf Series.

Here is what some of the Ryder Cup Players, who have played the Indiana Course at Desert Springs have had to say about it:

“Having last been here in 2004, the first thing I noticed was how mature the landscaping had become. It’s a course that provides you with a test for every shot you have in your bag. The course is in immaculate condition with greens of equal quality to those we play our own tour events on. If you want to hone your game, immaterial of what standard of golfer you are, then this is the place to come!”

“Desert Springs is a very stimulating test of golf. It is a thinking mans course, not easy to overpower but one that requires excellent course management skills. I really enjoyed it and felt it tested my skills fully”.

“I actually found myself hitting my driver a lot at Desert Springs. It is a course that demands accuracy and thought but it does allow you to attack and make birdies. I found it a superb looking course and in top class international condition. It is a genuine test”.

”
Loved the course; a proper shot making course. I made loads of birdies, which was great, but I got penalised for bad shots. That’s the way the best courses treat you. One of the most refreshing courses I’ve played in along time and one I look forward to re-visiting, I don’t think it would ever be boring”. 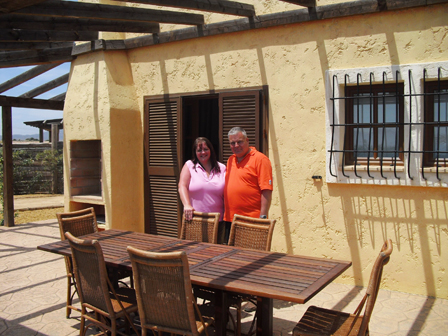 As you are probably aware, we are now the proud owners of 10 Desert Gold. After many enjoyable visits, we have now joined the family of Desert Springs.

We would like to take this opportunity to thank you and all your staff for their assistance and co-operation throughout the whole process. We would particularly like to thank both Paul and Inma (not sure of spelling) for resolving the issues generated by the bank and keeping us as calm and stress free as possible whilst things appeared to be breaking down (fairly normal for Spain as we understand). We have already thanked Paloma for her assistance and diligence in seeing this matter through to a successful conclusion and can now look forward to some happy times in our own place.

Thanks should also go to Paul Taylor without whose initial involvement and advice, this process would not have happened.

For further information and reservations