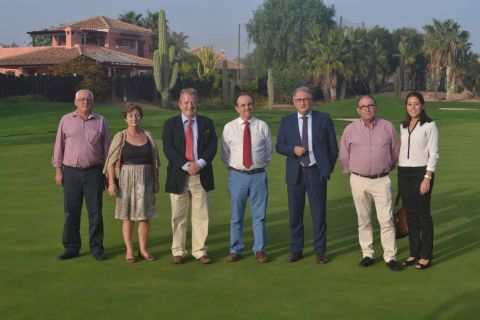 
On Monday 20th October, Desert Springs Resort was host to Rafael Rodríguez Bermúdez, Andalucía Minister for Tourism & Commerce, one of nine Ministers that serve in the Government of Andalucía, accompanied by Jesus Caicedo Bernabé, Mayor of Cuevas Del Almanzora & MP & Senator of the Spanish Central Government and other dignitaries.

In 2013 the local provincial heads of Urban Planning and Tourism visited Desert Springs and were so impressed by our resort that they recommended that the Minister should visit.

The Minister spent most of the day at Desert Springs inspecting the installations and attending discussions and presentations about Quality & Sustainable Tourism.

His comment at the end of his visit was: –

“You certainly appear to have the correct formula for Quality & Sustainable Tourism, it shows in your staff and installations. Others should learn from you.

I look forward to coming back soon”.

“The objectives of the Almanzora Bay Group in the Almanzora have always been the creation of a wide range of opportunities for a better quality of life for both residents and visitors alike and the development of high quality residential tourism as a viable long-term alternative economy for the Almanzora, its people and its new residents.

The comments received from Rafael Rodríguez Bermúdez confirm that those objectives are being achieved, and that is something that all should be justly proud of!”