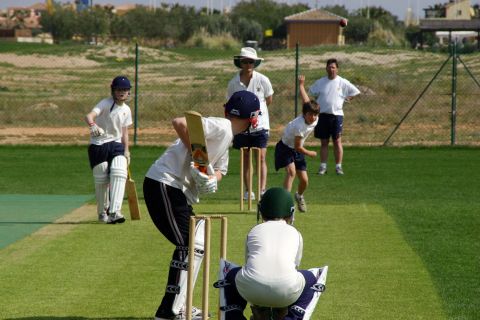 Bedford School, an All-Boys Boarding & Day School for Ages 7-18 will be stepping up their preparations for their 2016 cricket campaign by attending a 3-day pre-season training camp at the Desert Springs Cricket Academy between Monday 4th – Thursday 7th April 2016.

Bedford School is composed of the Preparatory School (ages 7 to 13) and the Upper School (ages 13 to 18) with in total around 1,100 pupils, of whom approximately a third are boarders.

It has produced one Nobel Prize winner, recipients of the Victoria Cross, twenty-four rugby internationals, and the winners of seven Olympic gold medals, educating leading personalities from fields as diverse as politics, academia and the armed forces, cinema, the legal profession and sport.

The Bedford School team training camp will comprise Twenty-Three (23) players and Three (3) coaches, all of whom will be spending their time completing numerous training sessions each day, which will include grass net practice, both bowling and batting, strength work, running, speed and agility work. As they will be outside and on grass, the squad will also be able to do fielding and throwing practice in realistic conditions, something not possible indoors back in the UK.

"We are delighted to welcome Bedford School for their inaugural pre-season training camp at the Desert Springs Cricket Academy. The first recorded match on the Bedford School Cricket Ground was played in 1876, so it is clear to see that the school has an impressive history within the sport. The team has the opportunity to follow on from the visits of numerous County Cricket Clubs as well as the England Team who have visited the Desert Springs Cricket Academy for their own training camps and we sincerely hope that the training camp will provide a spring board for a successful season for them back in the UK.”

The feedback received from those visiting Cricket groups can be viewed Here.

Accommodation for the players and coaches is in some of the privately owned apartments and townhouses at Desert Springs Resort normally reserved for holidays and short breaks and the resort’s executive chef will be on hand to cater for the special dietary requirements of individual players dining in the resort’s award-winning El Torrente Restaurant.