The Seventeenth annual election for members to choose a Treasurer and two members each for the Club’s Handicap and Competition Committees, for the period 1st April 2021 through 31st March 2022, is announced.

Since April, 2005, Club Officers have been elected annually from and by Members to work with the management of the Club.  It has enabled willing Members to participate to a greater extent in both golfing and Membership aspects of the club and to engage directly as elected representatives with its operators and owners.  An important objective has been to provide an approachable, open and official channel of communications between Members and management and to provide a representative grouping of Members and management, where focused and informed discussion of issues, proposals, possibilities and solutions could take place in a positive manner. This has worked well and has led to enjoyment for all at Desert Springs.

Ultimately the representative structure of the membership depends on Members’ willingness to allow their names to go forward, to devote time to represent the views of others, as well as their own, and to work constructively with management where measured debate can flourish.  Members have demonstrated this willingness previously with positive progress and we sincerely hope that the same will be true of these elections.

All completed nomination forms must be returned by hand, e-mail or post to the Clubhouse reception to arrive no later than 17.00 hrs. on Sunday 28th February.  We shall be letting you know during this period the names of those nominated from time to time, as we believe that this will assist in the process and remove uncertainty as to whether anyone has been nominated for any particular role already.

Immediately after that date, each member will be sent a ‘Voting Form’ identifying those persons going forward for election to each position. This form will also be available at the Clubhouse reception.

All completed voting forms must then be returned to Desert Springs by 17.00 hrs. on Wednesday 31st March, again by hand, e-mail or post for the attention of the Clubhouse reception.  Following the verification of the validity of the voting forms submitted and their counting, the number of votes received for each candidate will be published, identifying the names of the successful candidates, elected by the membership. 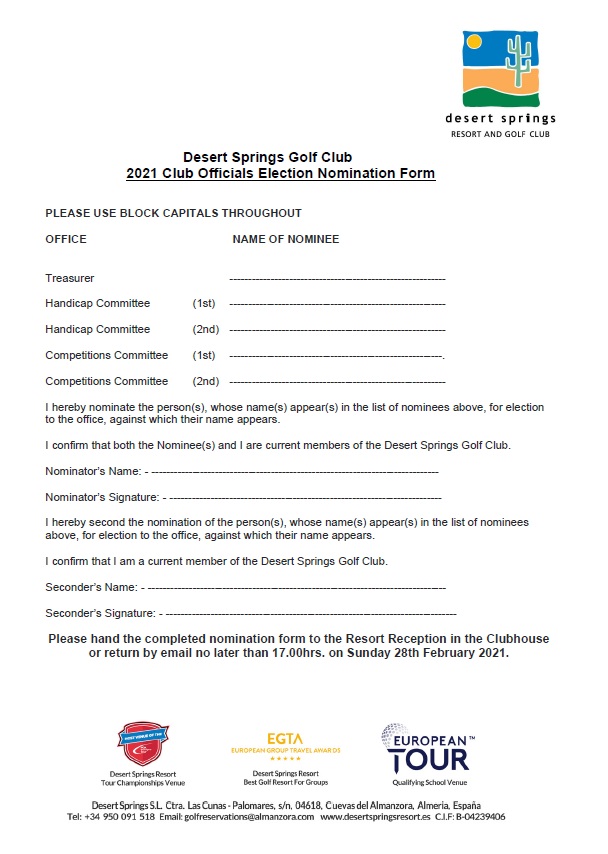