The England Cricket Team will undertake a four-day training camp at Desert Springs Resort in Almeria, Andalucía, Spain, concentrating on fielding, fitness & team bonding in the build up to the Champions Trophy in June.

Fifteen (15) members of the England Cricket Squad, accompanied by fourteen (14) Management, staff and coaches will be stepping up their preparations for the forthcoming Champions Trophy during a 4-day pre-tournament fitness, training and bonding camp between Tuesday 16th – Friday 19th May at Desert Springs Resort, Europe’s only international award-winning luxury family resort and championship desert golf course with its very own dedicated Cricket Academy, in the Almanzora region of Almeria, Andalucía in south-east Spain.

The pre-tournament training camp, will attempt to recreate the intensity of the teams inaugural visit to the resort which took place ahead of the 2015 Ashes, when the players had their first opportunity to become acquainted with their new head coach, Trevor Bayliss and resulted in the quality of their slip catching helping Alastair Cook’s team to Ashes victory.

England will make fielding and fitness a priority as they bid to lift a first global 50-over trophy when the Champions Trophy starts in June.

England coach, Trevor Bayliss regards fielding as non-negotiable, and wants it to keep pace with the remarkable progress England’s white-ball teams have shown with the bat.

Facilities at Desert Springs Resort will allow the bowlers in the 15-man squad to get a workout, and there will be time for bonding on the golf course.

The focus will be on making sure Eoin Morgan’s side are in the best possible shape – not just for the Champions Trophy, but also for the three-match series against South Africa beginning at Headingley on May 24th.

The camp has been designed to be a relaxed affair, to provide an opportunity for the players to both work seriously on their fielding skills and fitness levels, whilst at the same time having the opportunity to benefit from the extensive resort facilities with planned bonding activities.

A 14km round- trip to the local beach along private tracks from the resort, a couple of rounds of golf on the highly acclaimed Indiana course, team meetings held at the Resorts Private Reserve and social evenings at the Crocodile Club restaurant will be par for the course!

The players and coaches will be accommodated in some of the privately owned Villas at Desert Springs Resort and the resort’s executive chef will be on hand to cater for the special dietary requirements of individual players dining in the Crocodile Club Restaurant.

“Since the introduction of the cricket academy facilities at Desert Springs Resort in 2013 we have been host to numerous professional cricket teams; Lancashire CCC, Sussex CCC, Glamorgan CCC, Somerset CCC & Yorkshire CCC to name but a few, as well as numerous amateur university and school teams.

In cricketing terms, the greatest accolade that we could receive was to be host to the England Team, and in 2015 Desert Springs Resort was delighted to achieve that very feat by having been selected to host the England Pre-Ashes Camp. To have been selected to host the England team again this year, in preparation for the forthcoming Champions Trophy in June, is a great honour for all at the resort, and an event that will allow the resort to continue to grow in terms of its reputation for quality, a factor of benefit and prestige to the Resort, its members, property owners and the local area.“ 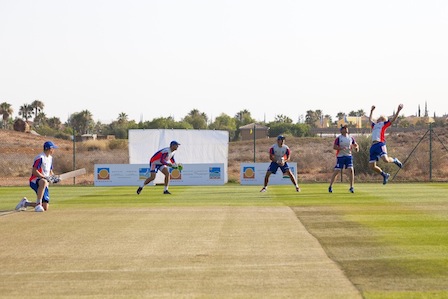