The Team Championship was open to boys and girls of all ages with a maximum handicap of 24 and was held over 3 days (54-Holes). For tournament day one & two the format was 4 Ball-Better-Ball Pairs Stableford Points. The format for tournament day three was Best Two individual Stableford Points Scores from each team being combined to achieve the Teams accumulative Stabelford score.

“Yet another excellent event. The children have enjoyed the trip very much. Nothing more to add other than that we are very much looking forward to next year!”

That is the verdict of Ryan Scott, PGA Coach for Loretto Golf Academy based at Scotland's leading Scottish private boarding school, set in 85 acres of leafy campus just outside Edinburgh that provides an all-round education for just over 600 boys and girls aged 3-18.

“The event is not only made by the great accommodation and facilities but also the ‘nothing is too much trouble’ attitude of all of the staff. Thank you for making our stay a real pleasure!”

That was the summary of Neil Kendrick, Head of Cricket and Golf at Whitgift School.

The Team Championships got under way at Desert Springs Resort on Sunday 14th February with a practice round on the Championship Indiana course, providing all players the opportunity to experience Europe’s first and only true desert golf course in preparation of the tournament rounds, followed by a Welcome Reception & Dinner at the Resorts Crocodile Club restaurant.

Monday 15th February saw tournament day one take place on the Indiana course where the teams played 4 Ball-Better-Ball Pairs Stableford Points for team rankings. Team ‘Loretto 7’ led the way with 77 points, 5 under par followed by ‘Whitgift 1’ and ‘Millfield 2’ on 75 points, 3 under par. 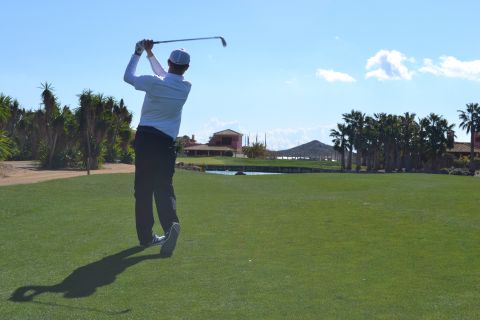 A student plays their approach shot into Hole 15 “Abyss” on the Indiana course at Desert Springs.

The tournament format was repeated on day two Tuesday 16th February, and in true golfing fashion this was the day for some teams to try and hold their position whilst others would be trying to climb the team rankings!

Team ‘Millfield 1’ led the way with the main charge on the field with an improvement on their first round total by 7 points, achieving an impressive 79 stableford points, 7 under par, securing the best score of the day.  Team ‘Loretto 1’ and Teams ‘Whitgift 1’ and ‘Millfield 2’, maintained the pressure on the field by securing the second and third best team stableford points score of the day, 75 and 72 respectively.

Enjoying their evening BBQ & ‘Quiz-Night’ at the Resorts Crocodile Club restaurant, the competitors were informed of the team rankings going into tournament day three, which was to see the team individual Stableford Points Scores being combined to achieve the Teams accumulative Stabelford score. 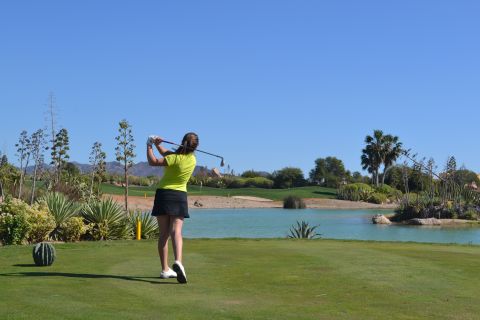 When all the shots were played and all the putts sunk, the Team event was to prove to become a close event, which came down to the last team members!

Team ‘Loretto 6’ showed a great display of golf during the last tournament round, returning cards with 43 and 37 points, leading the charge and climbing spots on the leaderboard.

However, It was clear to see that the Championship was going to come down to a battle between Team ‘Millfield 1’, ‘Loretto 1’ and Team ‘Loretto 7’ who, going into the final round were only separated by three stabelford points.

Team ‘Loretto 7’ were first to complete their round recording a score of 67 stableford points, insufficient to battle for the title, followed by Team ‘Loretto 1’ with 72 points, meaning that all that was left for Team ‘Millfield 1’ to do was to ensure they could do the same to claim the trophy. Team ‘Millfield 1’ accepted the challenge and posted a score of 77 points, with rounds of 40 and 37 points to claim the ‘III Desert Springs & Millfield European Schools Team Championship’! 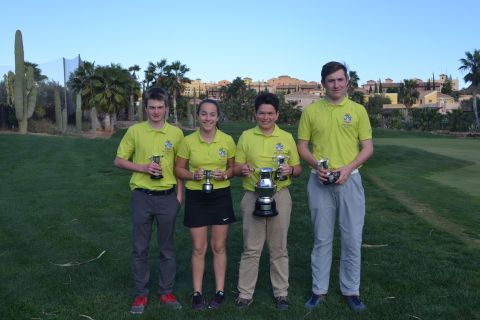 Further, there were individual trophies on offer to be awarded to the male and female player with the Best Individual Scratch Score and Best overall individual Stableford points score for tournament round three.

Best Male Scratch score was awarded to Niklas Jakobsen from Team ‘Loretto 1’ with a playing handicap of 6,8 and an impressive score of 4 over par 75. 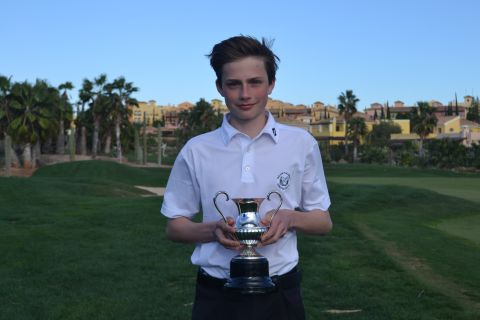 Best Female Scratch score was awarded to Louise Caldon from Team ‘Millfield 1’ with a playing handicap of 7,2 and a score of 8 over par 79. 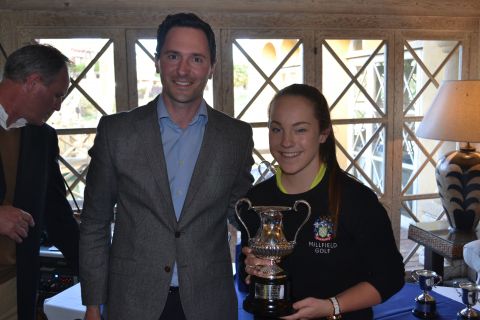 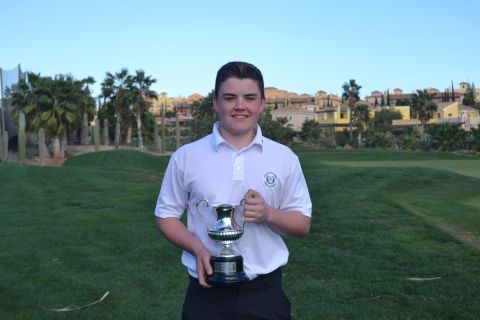 “Thank you for such another brilliant week. Everything was just perfect and the staff looked after us so well. See you next year!”

“Thank you very much for a really enjoyable week. From the pick up in the airport with lunch provided, delicious meals every day. This has been an amazing event, which I would indeed recommend to my friends. A big many thanks too of course to the staff for making all this possible!”

“Everything was perfect except for one thing, the fact that we couldn’t stay any longer. I sincerely thank all the staff for being so friendly from when we arrived to when we leave. This trip was probably the most memorable school trip I will have in a long time.”

“We have had a memorable and enjoyable week at Desert Springs. As you will no doubt have noticed, we brought a younger group this year and for many of them this will have been their first Golf Tournament experience. It could not have been a better one; they have much enjoyed being part of the event and have also greatly appreciated the excellent food and accommodation. Everything has run like clockwork and our players have greatly appreciated your support and encouragement both on and off the course.”

16-year-old Harry Plowman Ollington with a handicap of 1, from Whitgift School remarked:

“Thank you to all the staff for another great week. The course was in fantastic condition. Can’t wait to come back!”

“A very enjoyable trip and always made to feel “at home”. The staff are all very friendly and professionals in their area. Desert Springs is a resort you need to experience!”

17-year-old Tom Barker with a handicap of 2, from Millfield Golf Academy remarked:

“I live for Desert Springs putting and chipping greens!”

16-year-old Elliot Dawson with a handicap of 5, from Millfield Golf Academy remarked:

“The golf was an entirely unique experience and I have never played a course like it.

The course layout was perfect for the event.

The apartment was very warming and we all felt very welcomed by the staff.”