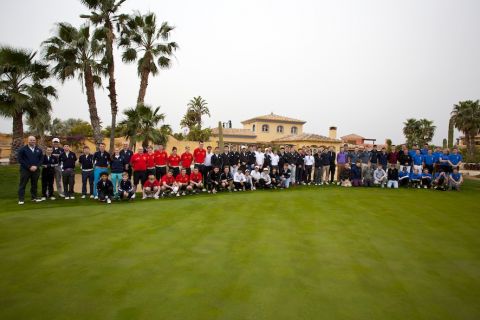 The Team Championship was open to boys and girls of all ages with a maximum handicap of 24 and was held over 3 days (54-Holes). The tournament format was 4 Ball-Better-Ball Stableford Points on day 1 & 2 with day 3 being the Best two Individual Stableford Points Scores from each Team being combined to achieve the Teams accumulative Stableford score. 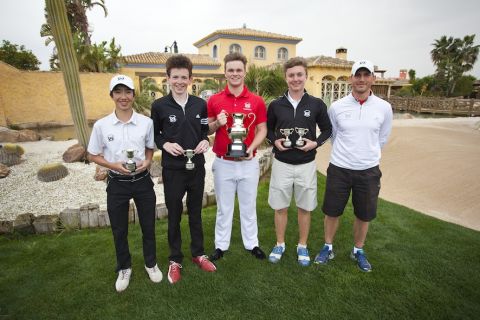 “It’s a great warm up for the season ahead! The practice facilities were excellent and the competition was of a high standard.”

That is the verdict of 18-year-old Marcus Crowe, from the Loretto School Golf Academy based at Scotland's leading Scottish private boarding school, set in 85 acres of leafy campus just outside Edinburgh that provides an all-round education for just over 600 boys and girls aged 3-18.

“This was a great event to start off the season. The teams enjoyed their stay and their golf has benefitted from both the competition and practice.”

The Team Championships got under way at Desert Springs Resort on Saturday 15th February with a practice round on the Championship Indiana course, providing all players the opportunity to experience Europe’s first and only true desert golf course in preparation of the tournament rounds, followed by a Welcome Reception evening at the Resorts Crocodile Club restaurant.

Sunday 16th February saw tournament day one take place on the Indiana course where the teams played 4 Ball-Better-Ball Stableford Points for team rankings. Team ‘Loretto 4’ lead the way with 83 points, 12 under par followed by ‘Bradfield 2’ on 79 points, 8 under par and ‘Reeds 1’ with 78 points, 7 under par. 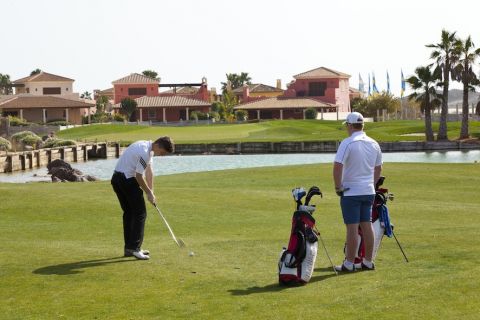 A student plays their approach shot into Hole 15 “Abyss” on the Indiana course at Desert Springs.

The tournament format was repeated on day two Monday 17th February, and in true golfing fashion this was the day for some teams to try and hold their position whilst others would be trying to climb the team rankings!

Team ‘Bradfield 2’ lead the way with an improvement on their first round total by 3 points, achieving a score of 82 points, 11 under par, however the main charge was made by team ‘Loretto 2’ who also scored 82 points, 11 under par, equaling the best score of the day and improving on their opening days score by 5 points.  Overnight leaders ‘Loretto 4’ dropped off amassing 72 points, 1 over par, which resulted in some movement in the second day standings.

Enjoying their evening meal at the Resorts Crocodile Club restaurant the competitors were informed of the team rankings going into tournament day three which were; ‘Bradfield 2’ with 161 points, ‘Loretto 2’ with 159 points and ‘Loretto 4’ with 155 points, claiming first, second and third position respectively.

Particular mention should go to ‘Millfield 1’ Team member Alfredo Curbishley with a playing handicap of 1 who scored a Gross 66 (5 under par) helping the team improve to fourth position in the team rankings! 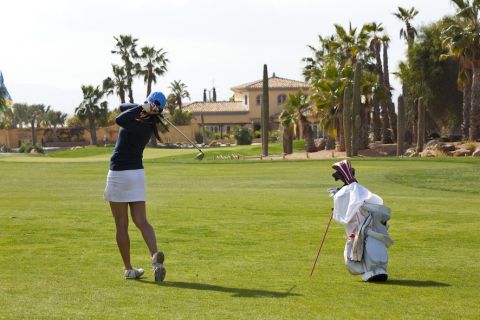 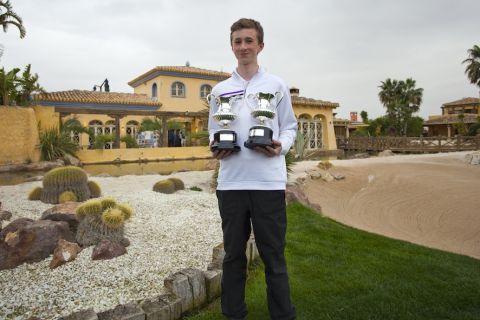 John Ralph cleaned up with the trophies on offer as he also posted 41 Stableford points to claim the Best Individual Stableford score of the day due to his lower handicap, beating second place Nick Hammond from Team Durham 2 who also scored 41 points. Third place was fiercely contested for with David Buttler & Lorenz Woehl of Loretto, Dominic Salmon of Durham, Alex Gadd and Lewis Brown of Reeds all posting 38 Stableford points. Due to having the highest handicap of all the players third place was awarded to David Buttler.

When all the shots were played and all the putts sunk the Team event was the closest of them all!

Team ‘Loretto 1’ who were 10 points behind the overnight leaders ‘Bradfield 2’, made a strong charge on the field as well as a statement of intent by posting not only an impressive, but also the days best-combined score of 78 points, 6 under par.

At the same time ‘Bradfield 2’ were loosing their grip on the Trophy slipping back down the leader board after posting a score of 67 points.

That left the tournament open to whoever could see it through to the end and Team ‘Loretto 2’ were up for the challenge, holding their nerve to post a final score of 71 points.

In the end, Team ‘Loretto 2’ who were lying in overnight second place staved off all challengers to climb one further place and become crowned the champions of the inaugural Desert Springs & Millfield European Schools Team Champions by posting a three day total of 230 Stableford points, followed by ‘Loretto 1’ with 229 points and ‘Bradfield 2’ with 228 points.

“This was the ideal venue to hold the Schools Championships. Comfortable accommodation, excellent practice facilities, a challenging but enjoyable course and very tasty food! I very much hope that I get the chance to return to Desert Springs, not only next year but later in life as well.

“I will be deeply unpopular with my colleagues when I return. I have had a genuine holiday in spectacularly scenic and comfortable surroundings enjoying a very well organized tournament, excellent meals and a lifestyle to which it is all too easy to become accustomed. How soon can I book for next year ?”

“The tournament enables all age groups, levels and standards of golfers to play together. School golf is the future of golf and this event has provided opportunities to all. Desert Springs is a great resort with a great golf course that provides a challenge to all.

“The tournament format worked really well. A handicap event where players of all abilities could compete against each other and all be in with a chance of winning. This is just what schools golf needs to help young players gain experience and develop as golfers.”