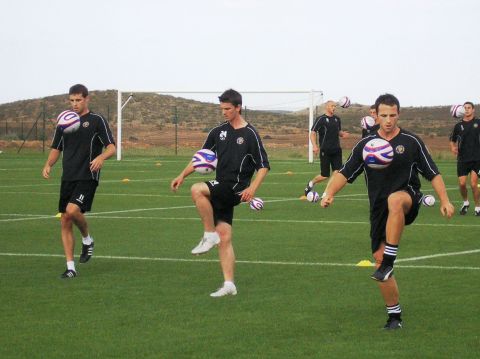 A view of the Football Academy at Desert Springs Resort, Europe’s only international award-winning luxury family resort and championship desert golf course in the Almanzora region of Almeria in south-east Spain, which has been selected by Hartpury College Football Academy from Gloucester, England, as the venue for their 2013 training camp.

The Hartpury College Football Academy based in Gloucester, England have selected the Desert Springs Resort, Europe’s only international award-winning luxury family resort and championship desert golf course in the Almanzora region of Almeria, Andalucía, in south-east Spain, as the venue for their 2013 winter training camp.

A squad of twenty two elite players and twenty development squad players with three officials from Hartpury College Football Academy are following in the footsteps of other teams such as Bryne, Honefoss, UD Almeria and Shrewsbury Town Football Club, all of whom have previously benefited from the facilities of the Football Academy established at Desert Springs.

The Hartpury College Football Academy established in 2002, is split into two sections; Junior and Senior.  The Junior section caters for the further education side of the college and includes players aged 16-19 years, whilst the Seniors are made up of higher education students on degree or foundation degree programmes aged 18 years and upwards.

During a seven-night stay between Saturday 6th – Saturday 13th April at Desert Springs the Hartpury College players will benefit from training and coaching on the football academy’s international-size quality grass pitch. A new hard standing area provides outside space for facilities such as a free weights gym, stretching mats and a medical area. The players will also be able to make use of the goalkeeper training and five-a-side games area. 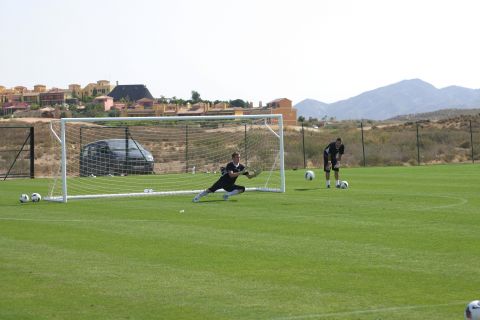 The football academy practice facilities at Desert Springs, which are being used by Hartpury College Football Academy players for training in warm weather.

“Further to a familiarisation visit to the resort by Hartpury Football Junior Academy Manager, Paul Tassell, he felt that the quality of the Football Academy pitch and training facilities, coupled with the wide range of sports and leisure facilities available in the resort, were the driving factors for his decision to select Desert Springs for their training camp.” 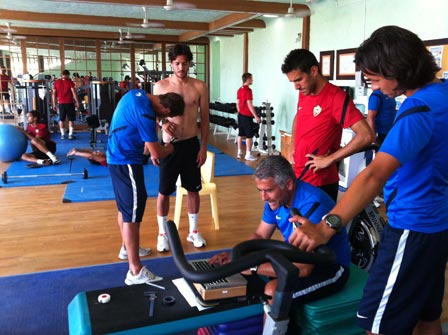 Players and coaches utilizing the gymnasium facilities available at the Sierra Sports and Fitness Club at Desert Springs.

The players and officials will be accommodated in some of the privately owned apartments normally reserved for holidays and short breaks at Desert Springs and the resort’s executive chef will be on hand to cater for the special dietary requirements of individual players dining in the award-winning El Torrente Restaurant.

Already well known as a resort specialising in golf and family holidays, Desert Springs is gaining popularity as a centre for warm-weather training for golfers and cricketers, as well as footballers.

For more information about training camps, sports breaks and properties available, or golf at Desert Springs, contact The Almanzora Group on telephone +44 (0) 1242 680 116 or visit the website, www.almanzora.com

Getting there from the UK

Desert Springs in The Almanzora region is easy to reach from the UK, thanks to three international airports. They are: Almeria Airport, around 40 minutes away by road; Murcia Airport, 80 minutes by car, and Alicante Airport which is a drive of less than two hours. Airlines currently flying to the region from the UK include easyJet, Monarch, Ryanair, Jet2, Jetair Fly and Thomas Cook.