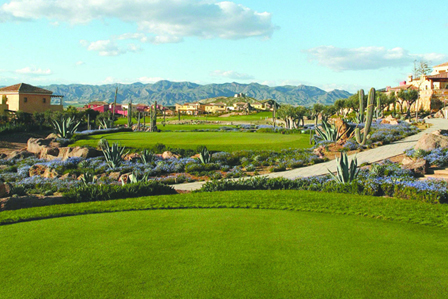 During the years that have elapsed since the initial evaluation, the Indiana Course has undergone natural maturity along with continual modifications made to improve the already exceptional aesthetics, quality and challenge of the course. This has included, by way of examples, the introduction of the lake on hole 15 and both the introduction and on occasion, relocation, of planted areas. Considering this evolution and the scores recorded in Club Tournaments it was apparent that the difficulty of the golf course was no longer reflected in the original slope ratings; in May the RFEG were invited back to Desert Springs to re-evaluate the Indiana Course. Following their two-day evaluation they have now assigned the course with new ratings, which take immediate affect and shall reflect the true difficulty of the Indiana Course. These new ratings, with the previous ratings in brackets, are as follows:

To illustrate how this increase in slope rating affects stroke allowances please see the examples below.

A list showing the new Slope Rating along with ‘Exact Handicaps’ and the corresponding ‘Handicap of Play’ is now on display in both the Men’s and Ladies changing rooms.

We hope these new ratings come as good news for those who will benefit from receiving that all-important extra stroke!