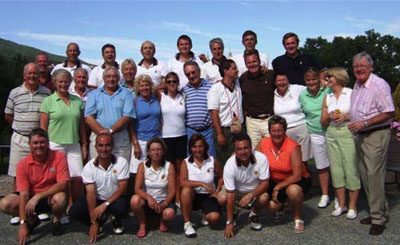 The teams of La Herrerìa and Desert Springs

The promotion of the Desert Springs Resort and Golf Club has included presentations to golf clubs in Spain. Many of their members have visited on golfing holidays and our relationship with these clubs has strengthened. To provide for some fun out of this for our own Members, in 2006 we challenged them to a Ryder Cup style competition on the Indiana at Desert Springs, against our Members.

The first challenge was made to La Herrerìa Golf Club in Madrid, who promptly accepted and suffered a rare defeat at Desert Springs in the inaugural match.

This weekend, a team of 16 members from Desert Springs, led by Captain, Helen Lavis and Director of Golf Simon Coaker were on tour in Madrid to play the away leg of the match at the invitation of La Herrerìa Golf Club.

La Herrerìa is a beautiful tree lined course set in the old hunting grounds of the Royal Palace of San Lorenzo de El Escorial, the course enjoys stunning views of the palace as well as a fabulous and imposing mountain backdrop.

Desert Springs members descended on San Lorenzo de El Escorial from near and far on Friday for a practice round. Fernando Navarro, captain of La Herrerìa, himself a 4 handicap player, had assembled a very strong team for the occasion.

On Saturday, 8 four-ball matches saw La Herrerìa come out on top 5 matches to 3. Victories from Susan Kenny and Kay Dunphy, Barry Carver and Paul Taylor and Helen Lavis playing with Pat Dunphy gave the home team a run for their money but La Herrerìa had their revenge for their first defeat in their Club’s history at Desert Springs last year.

On Saturday evening Fernando and his team hosted a Gala dinner at the nearby Horizontal Restaurant, all players remained vertical and enjoyed the wonderful hospitality and camaraderie that this annual match epitomises. Captain Helen Lavis gave a vote of thanks to the members of La Herrerìa for their hospitality and to the Desert Springs team for making their way to Madrid for the match and invited La Herrerìa back to Desert Springs for the 2008 match.