For the second time in its short history, Desert Springs welcomed the Royal Spanish Federation of Golf (Real Federacion Espanola de Golf) and 132 of Europe’s leading amateur players, who competed in the Spanish International Amateur Open, the “Copa de S.M. El Rey” or The King’s Cup, the most prestigious amateur golf tournament in Europe, from the 28th February to the 4th March.

The field of competitors, including 36 Spanish players, were attempting to follow in the illustrious footsteps of some of the tournaments previous champions such as Sergio Garcia, Darren Clarke and José María Olazabal, all of whom had lifted the ‘Copa del Rey’ during their amateur careers.

Following the first 2 days of individual medal play, the cut was made at 148 (4 over par or better) with 32 players   advancing to the match play stage of the tournament.  Spain was well represented in this knock out stage with 6 Spanish golfers surviving the cut, joined by 16 English, 3 French, 2 German, 2 Welsh, 1 Finnish, 1 Portugese and 1 Scottish player.

After 36 holes of match play golf on Friday 2nd March had been completed, the field had been reduced to 8 players.  By the end of the semi finals on Saturday 3rd March, a further 6 players were eliminated, leaving John Parry from England and Baptiste Chapellan of France to do battle over 36 holes the following day for the championship.

With a strong performance in the morning round, John Parry took a commanding lead into the afternoon with a 5-hole advantage and went on to confirm his domination of the tournament, securing 4 birdies in the first 8 holes of the second round to be 4 under par. With Parry securing yet another birdie on the Par 5 9th Hole against the par of Baptiste Chapellan, Parry secured an astounding 10-and-9 victory.

“On behalf of the R.F.E.G, my utmost thanks to Desert Springs for a tremendously well organised event, for the exceptional quality of presentation of The Indiana course and for the highest level of service received from their team.  Desert Springs is an example for all other courses, especially in respect of its ecological standards which have no comparison.  Golf at Desert Springs is different and so too is the marvellous ambience!”

“Desert Springs continues to build its history by hosting such prestigious events as the ‘Copa del Rey’.  There is no equal to Desert Springs in terms of the quality of the Indiana course and the warmth of welcome offered to our guests.  With the huge success enjoyed in hosting this tournament for the second time, Desert Springs will once again grow in terms of its reputation for quality, a factor of benefit and prestige to the Resort, its Members, Property Owners and the local area.” 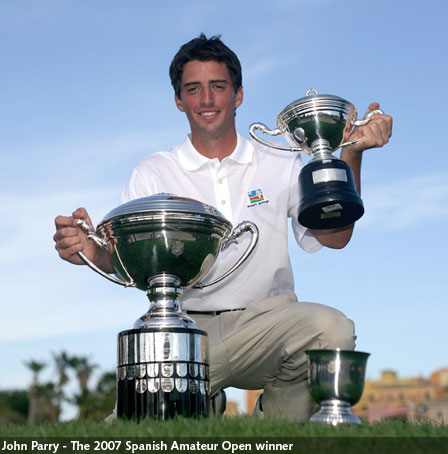