News of a link forged between the Cheltenham-based Spanish property firm The Almanzora Group and leading foreign currency and international payment specialist Axia FX of London means that the buyers of new properties in resort, village and beach locations in south-east Spain could save thousands of pounds.

The Almanzora Group – which acts exclusively as the principal agent in northern Europe for the for the development companies comprising the Almanzora Bay Group which is building in the Almeria region of Spain – says that its new partnership with Axia FX will give potential buyers a fast-track link to currency exchange rates which could save them significant sums on the cost of buying their properties. They are at Desert Springs, Europe’s only international award-winning luxury family resort and championship desert golf course, the traditional fishing village Villaricos and nearby Playa Marques, known for its seven kilometre long Great Sandy Beach, El Playazo.

Simon Coaker, The Almanzora Group’s sales and marketing manager, says: “We are selling properties ranging from apartments, townhouses and cottages to villas, beach houses and country houses at prices from €178,000 to more than €1 million, but with the Euro and Pound Sterling virtually at parity, favourable exchange rates are essential when calculating the total purchase cost.

“With Axia FX having access to interbank rates, they can ensure the prices the client receives are much better than they would have received from their bank, providing him or her with considerable savings. In fact, for Almanzora’s clients, Axia FX will guarantee an improved rate compared with that received from any high street bank. Both companies have agreed to work in partnership with The Almanzora Group, with each referring its clients to the other.”

Simon said that negotiating favourable exchange rates with Axia FX should not only net the buyer a better exchange rate, but also a saving in commission because Axia will only charge one per cent when others, including banks, charge more – even as much as six per cent. The potential double saving for the purchaser is considerable.

David White, managing director of Axia FX, said: “We will ensure that clients of The Almanzora Group always receive excellent service and we are able to fix quoted rates for up to one year in advance.”

Axia Fx
Axia Fx was formed in April 2006 and commenced trading in June 2006 with the sole aim of making Foreign Exchange as simple and cost effective as possible. Having started life alongside a parent company, it has recently become a privately-owned company under the stewardship of David White.

The company’s head office is in the Canary Wharf area of London ensuring the company has first hand access to all market information gleaned through its global network of traders, economists, officials and market participants.

IMPORTANT FOOTNOTE: To avoid confusion, please note that two of the organisations mentioned above have names which are similar but different. They are The Almanzora Bay Group [THE DEVELOPER] and The Almanzora Group Ltd [THE AGENT]. 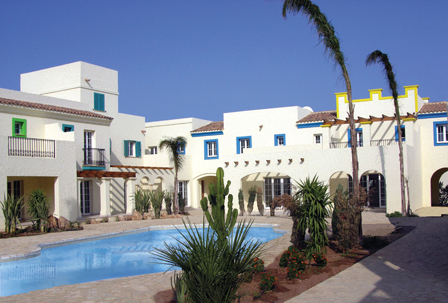