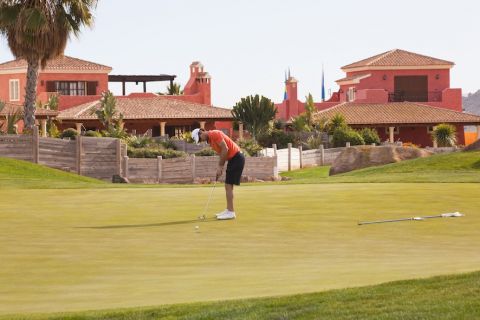 Nick Dougherty eases in a birdie putt on Hole 5 “Notch” on the Indiana course at Desert Springs, Europe’s only international award-winning luxury family resort and championship desert golf course in the Almanzora region of Almeria, Andalucía in south-east Spain.

Recommend to him by Michael Welch, Head Coach at the Lee Westwood Golf Academy who had just completed their annual winter training camp for Eighty-one students at Desert Springs Resort, Nick commented:

“The location and host facilities were absolutely beyond our expectations and the accommodation provided was excellent.

The resort staff were overly helpful, friendly and amazing!” 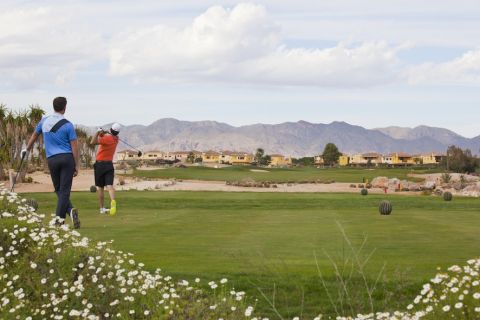 Coach Stuart Cartwright looks on as Nick Dougherty plays his Tee shot on Hole 6 “The Gambler” on the championship Indiana course at Desert Springs.

Nick turned professional in 2001 and gained membership to the European Tour for 2002.

In early 2005 he earned his first victory on the European Tour at the Caltex Masters in Singapore, going on to reach the top 100 of the Official World Golf Rankings in the middle of the year, and ended it in 15th place on the final European Tour Order of Merit.

Leader after the first round of the 107th U.S. Open at Oakmont Country Club with a two under par round of 68, Nick eventually finished the tournament in a tie for seventh place. This is, to date, his best finish in a major championship, and was also enough to gain automatic entry into the following years championship and the U.S. Masters.

Later that year he secured his second European Tour victory at the Alfred Dunhill Links Championship and finished the season placed 11th on the Order of Merit.

Nick went on to record his third European Tour victory at the 2009 BMW International Open in Munich, Germany.

“The resort is one of the best golf resorts I have been to in Europe. The facilities for practice are second to none and Desert Springs is a great place for players of all standards to come to improve their game and have fun at the same time.” 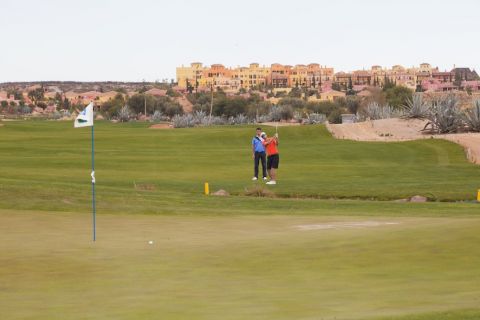 Coach Stuart Cartwright is part of the Mike Yorke Golf Academy team at Horne Park in the UK. The last six years have seen him progress his coaching career at great speed and 2011 saw two of England’s most talented European Tour players start working with Stuart.  By the end of 2013 these two famous golfers have delivered over ten top ten finishes.

Stuart remarked of his experience at Desert Springs:

“Desert Springs provides the essentials to develop the skills of golfers from beginner to elite level. Rarely do you find such facilities across the world; Desert Springs is the number one choice for all aspiring golfers.” 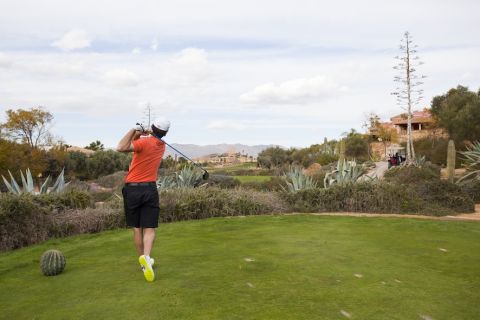 Asked if he would return to Desert Springs Nick responded:

“Yes I would, this has been a very pleasurable and beneficial training camp for me; thanks for your hospitality!” 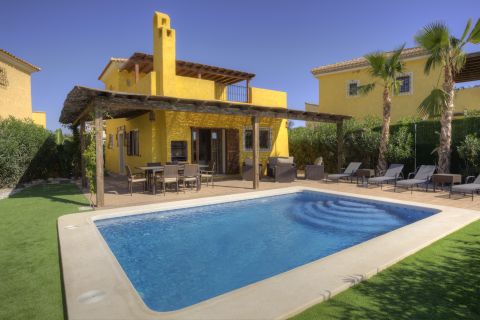 Accommodation for Nick Dougherty and his Coach Stuart Cartwright was provided in the Pueblo Villas available at Desert Springs.

Desert Springs, Europe’s only international award-winning luxury family resort and championship desert golf course, is proving to be one of the most popular destinations for warm weather winter training for European Tour and Ladies European Tour players and camps among the growing number of National Teams and Schools with their own golf academies and teams, currently estimated at around 90 in the UK. Visiting groups have included the Scottish Golf Union International Boys & Girls squad members, the National Squad of the Golf Union of Wales, the Irish Ladies Golf Union, golfing pupils from Hartpury College Golf School, Lee Westwood Golf Academy, Darren Clarke Golf School, Millfield School, Reading Blue Coat School at Sonning-on-Thames, King Edward’s School in Bath and Loretto School at Musselburgh near Edinburgh.

All golf trips to Desert Springs are bespoke. If desired, the programme can include time away from the golf course for some local sightseeing in what many regard as ‘the real Spain.’

During their stay players have opportunities to swim, play tennis and use the gymnasium, trim trail, jogging tracks, paddle tennis and beach volley ball courts.

Already well known as a resort specialising in family holidays, Desert Springs is gaining popularity as a centre for warm-weather training for cricketers and footballers, as well as golfers.

Accommodation is provided in the apartments, townhouses and villas available for holidays and short breaks at Desert Springs. Meals are served in the resort’s Croc Restaurant, part of the family-friendly Crocodile Club that is geared up for a wide variety of leisure activities and the award winning El Torrente Restaurant at the Club House.