Trish Johnson won her 18th career title in the BMW Ladies Open in May, played in Italy. Trish was in spectacular form; she birdied the last 3 holes to finish the final round with a blistering 66 to finish 15 under par in total. Following her victory Trish was flown to Wentworth to take part in the prize presentation for the BMW PGA Championships awarding the trophy to the winner, Anders Hansen.

The victory moved Trish well in to contention for her 8th Solheim Cup appearance with the next match to be played in Sweden in September, she also moved into second place in the Ladies European Tour Order of Merit. Speaking to the press after her victory Trish gave credit to Desert Springs’ Academy Director Christine Langford for helping her with her putting during her last visit to Desert Springs.

The following week the tour moved to Belfast for the Northern Ireland Ladies Open where Becky Brewerton finished in third place only missing out on the play-off by one stroke finishing with a total score of 214 (-2). The result moved Becky to 8th position on the Ladies European Tour Order of Merit and kept her in touch for Solheim Cup selection.

After the KLM Open in Holland, in June the tour moved to the Club de Golf Masia Bach, Barcelona in Spain for the Catalonian Ladies Masters where both Becky and Trish were in stunning form.

With this, her fourth runners-up position this season, Becky remarked: –

‘I gave it a good go, but I just made a couple too many mistakes at holes where I had short irons in. I’ve been struggling to stop the ball from spinning with my wedges so every time it’s been coming back ten yards and it’s been difficult to allow for because a lot of the pins this week were difficult to go past.

I drove the ball as straight as I ever have which you need to do around here. My short game was good, but I made a couple of mistakes. All the same I gave it my best and committed to every shot where I could.’ 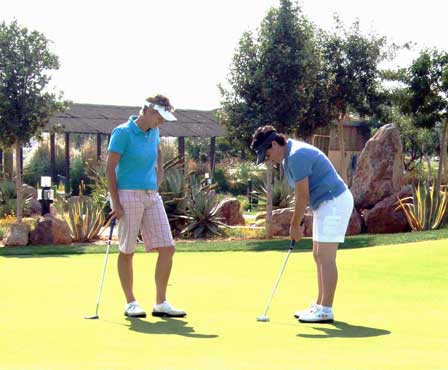